Isn’t it crazy when God opens new doors exactly when you need Him to? There are plenty of times when we have to wait for doors to open, even when it might not be in the timeframe we want.  But when things work out in His timing  before we even know we need it- it is so amazing!

Shane had been in his position at his job for almost two years now.  His hours were by far the biggest change from his previous position- he was actually home now! His stress level was down and the pay was better, pretty much a win win! With all that said he was getting burned out doing what he was doing. He was drained and not enjoying it anymore, which was bleeding into our family life. Something needed to change we just didn’t know what we were going to do about it. Then he got a call from an old boss, who offered him a better position at a new company. Here was God opening bigger and better doors for us before we even really needed them. I was so unsure about the new job! Being a stay at home mom, Shane is the sole provider for our family and changing jobs is scary. What if he hated his new job? What if it was more hours away from us again,taking a toll on our marriage like his previous job had? What if it wasn’t the right decision? So we prayed about it and we felt it was what we needed to do. He accepted the new job. The next day he went to work to put in his notice and was greeted with a new pay plan, one that would be paying everyone much less. God knew exactly what he was doing before we even understood how important this would be for us!

Shane had 5 days off between his old job and starting his new job,  which was another blessing for us! We decided to spend his time off on a mini vacation to Branson! The kids were so excited! We hadn’t been to Branson in 5 years, so the kids didn’t really remembered going before. We spent a whole day at Silver Dollar City. The new Time Traveller roller coaster just opened a few weeks ago and Layla was so excited to ride it! I was so impressed by her! She rode every single roller coaster and LOVED them. I on the other hand USED TO love roller coasters. I had previously ridden all of the roller coasters there (except Time Traveller of course) and was excited to ride some with my kids now! I got onto Outlaw Run with Layla and literally saw my life flash before my eyes. I still like roller coasters but the crazy ones just aren’t for me anymore. I feel like too many people depend on me that I need to be on this earth. Which may sound dumb to some but the mom of many that I have become is a wimp now. Haha! Lincoln and Logan did ride Thunderation, which is a smaller roller coaster. I sat next to Lincoln and it was the first time he’d ever been on a roller coaster. He was making me laugh so hard I was crying. All that he said over and over was “I am NOT enjoying this!!” the whole ride. He did however enjoy it some he said after it was done. Lucy even rode a few rides and loved them! 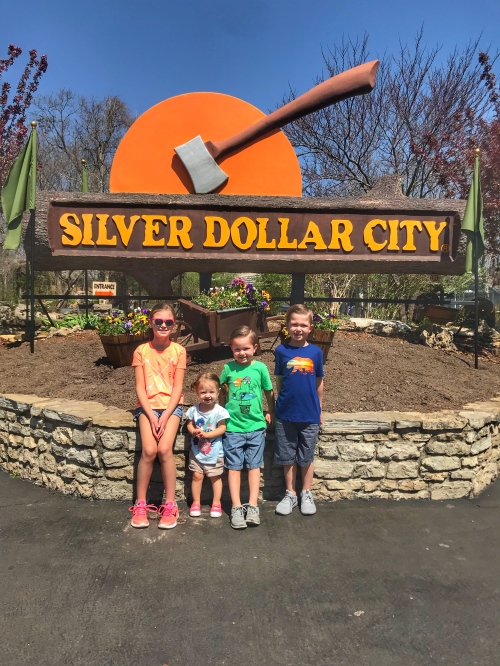 For dinner we went to Branson Landing and ate at Cantina Laredo, which is on the water. It was beautiful and 85 degrees so we sat on the patio and on one side of us was a fun water and fire show and on the other side were zip liners zip lining over the water. It made for a fun end to the day! 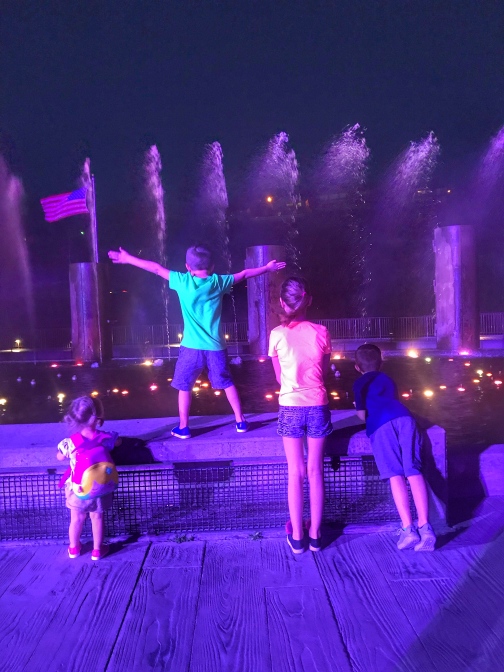 The next morning we ate breakfast at BillieGail’s Cafe. Their breakfast is yummy, and they are always packed! After breakfast we drove to Wild Animal Safari in Strafford, Missouri. They have a ton of animals in cages that you can see close up, including things like lions, tigers, giraffes, kangaroos etc. Then you can either drive your own car through the park or take a guided bus tour. I 1,000%  recommend taking the bus tour!! We got up close to so many different animals. We were able to feed them and pet them and were told all about the different animals. If you go don’t forget to purchase food to feed them! We will definitely be making another trip there again, all the kids had such a great time!

Shane started his new job on Monday and really loved it. So happy of him, for our family and thankful to God for everything he is doing in our lives right now!